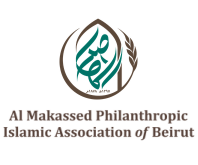 Almakassed Philanthropic Islamic Association of Beirut was founded in 1878. It is a charitable, humanitarian, and non-profit Islamic association that seeks to build a distinguished Makassed community based on sublime values and proud of its national belonging. Almakassed Association implements the principles of Islam with the aim of developing its society’s capacities and educating its generations. For this purpose, it disseminates Islamic education through its diverse institutions, provides healthcare, and offers educational, medical, social, and cultural services by subsidizing the costs of these services. Almakassed functions on the principle that religious faith is very important in the process of raising its generations and developing its community’s capabilities.
Almakassed is a Lebanese Association and as such, conforms to Lebanese laws. It has a General Assembly, a Board of Trustees, and a General Administration. The General Assembly is the highest authority of the Association; it is composed of honorary and regular members committed to the goals of the Association. The Board of Trustees is composed of 24 members elected by the General Assembly every four years; the Board outlines the policies and budgets of the Association and oversees its administration through special committees. The General Assembly is headed by the President of the Association who is also the Chairman of the Board of Trustees. He is the official and legal representative of the Association and is its Chief Executive Officer. The President is assisted by eight directors who form the Council of Directors. Each director is an executive officer of the relevant directorate. The Directorates are divided into centralized Administrative Directorates and decentralized Services Directorates.
The services offered by Almakassed Association cover three major sectors: the educational sector (with its schools, universities, and institutes), the health sector, and the social affairs sector. The sectors focus on educating the child and teenager, assuring health care and protection for the human being, and taking care of women and the elderly. Almakassed assumes these tasks through various projects and directorates that cope with the needs of the Lebanese society: Educational Directorate, Makassed University, Health Directorate, Social Affairs Directorate, and Real Estate and Operations.
Almakassed Association’s mission is to raise a modern society through educational, social, and health care. This is done by providing general basic education and especially Islamic education to the greatest number of children, and providing them with the gradient understanding of the message of Islam in their communities, upholding Islam’s noble values.
Almakassed Association aims at developing the human being and enabling him to build a peaceful country and cope with modernization through knowledge and faith, in accordance with the principles of Islam. This is done through its three main bodies: hospitals, schools/colleges, and alumni, the three of which aim to develop the spirit of teamwork for their members and promote the sense of responsibility and self-confidence within their communities.