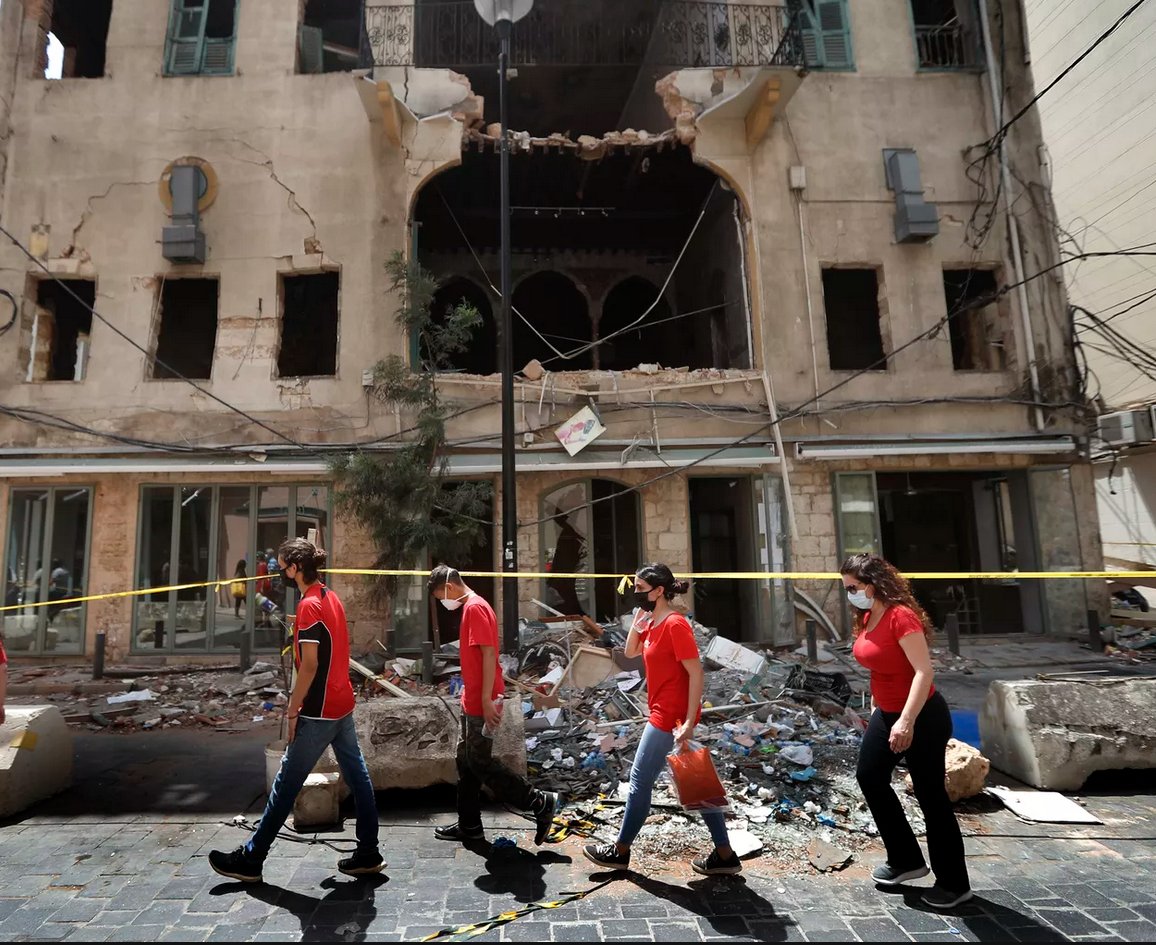 (Image: University students who volunteered to help clean damaged homes and give other assistance, pass in front of a building that was damaged by last week’s explosion, in Beirut, Lebanon, Tuesday, Aug. 11, 2020. The explosion that tore through Beirut left around a quarter of a million people with homes unfit to live in. But there are no collective shelters, or people sleeping in public parks. That’s because in the absence of the state, residents of Beirut opened their homes to relatives, friends and neighbors. Hussein Malla, Associated Press)

In the southern Lebanese town of Haris, a newlywed couple is living in one of Safy Faqeeh’s apartments for free. He’s never met them before, and they aren’t on a honeymoon. Their apartment in Beirut was wrecked when last week’s massive explosion wreaked destruction across the capital.

Faqeeh is one of hundreds of Lebanese who have opened their homes to survivors of the Aug. 4 blast.

The explosion, which was centered on Beirut’s port and ripped across the capital, left around a quarter of a million people with homes unfit to live in. But they have not had to crowd into collective shelters or sleep in public parks.

That’s because in the absence of the state, Lebanese have stepped up to help each other.

Some have let relatives, friends and neighbors stay with them. Others like Faqeeh extended a helping hand even farther, taking to social media to spread the word that they have a room to host people free of charge.

The couple saw Faqeeh’s offer on Facebook for a free apartment he owns in Haris, some 50 miles south of Beirut. They can stay as long as they need to, the 29-year-old Faqeeh said, and he has a second apartment available for anyone else in need. “This is not help, it is a duty,” he said.

When he was a teenager, Faqeeh’s family home was damaged in the 2006 war between Israel and Hezbollah, and they had to stay in a house in Tripoli, clear on the other end of Lebanon. Now he’s paying it forward. “We have experienced several wars and they (people) hosted us,” Faqeeh said.

The help that Lebanese are giving goes beyond a place to stay. Armed with helmets and brooms, hundreds of volunteers have circulated through Beirut’s heavily damaged neighborhoods, cleaning up people’s homes and doing free basic repairs, often enough to enable the residents to stay there.

You don't need money to donate for a cause.
Do you have skills to share?
Then speak your voice.